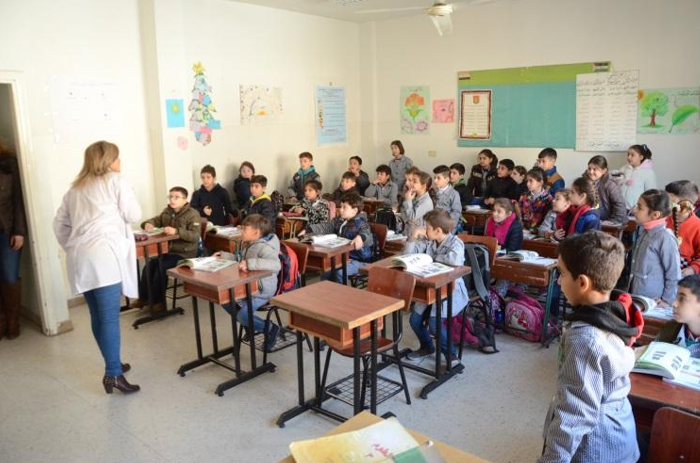 Basim is a gifted child with a talent that is special to a child of his age. He is a nine years old boy who likes fashion design and tailors dresses for dolls. He dreams of becoming a fashion designer.

He likes drawing and coloring and invites his friends home to share their hobby together. They spend hours drawing nice paintings and eating Mulukhia which is his favorite meal. In addition, Basim likes to play the piano and the guitar.

Huda, his mother who is a teacher, says that her son is very talented in fashion design as he designs dresses for dolls then sews them very nicely. She always encourages him to practice his hobby and expects that when he grows up, he will succeed in this field”. She added that her son is a brilliant 3 rd grade student. He has been honored by his school for top performance in Arabic, French and English languages. He likes studying languages and loves his school and friends.

Basim have been displaced with his family from Al Hamidiah neighborhood in Homs almost six years ago. They are currently renting an apartment in Jaramana area in Rural Damascus after Basims’s father has lost all his possessions because of war. Basim still recalls some of the incidents they have gone through in Homs before displacement; when mortar shelling starts in Jaramana, he remembers the way they fled and starts asking if they will have to leave their home once again.

Huda added,” Basim has the right for a good education and I want him to continue going to school; it is not his fault that our country is suffering from a war and I do not want him to pay for the deterioration of our financial situation after my husband lost his shop in Al Hamidia which was our sole source of
income. After losing the shop and our home in Homs, we own nothing anymore and our economic situation is difficult as we have to pay for the rent of the apartment and the shop where my husband works in selling
generators’ spare parts. We barely afford paying other expenses of a decent life.”

Huda learned from one of her relatives that MECC is assisting the parents who cannot afford school fees for the education of their children. She rushed to ask for help to guarantee a decent education for her son.She stressed that MECC team responded to her request and covered the school fees for Basim.

This site uses Akismet to reduce spam. Learn how your comment data is processed.

Any cookies that may not be particularly necessary for the website to function and is used specifically to collect user personal data via analytics, ads, other embedded contents are termed as non-necessary cookies. It is mandatory to procure user consent prior to running these cookies on your website.